WhatsApp update will help you keep your texts, photos safe from hackers

WhatsApp is working on an important update that will keep your conversations safe. The eagle-eyed sleuths at @WABetaInfo – a Twitter account dedicated to unearthing clues for new features in beta code – have uncovered references to an as-yet unreleased new addition to WhatsApp known as Protected Backups.

Details are a little scarce as the Facebook-owned chat app hasn’t officially acknowledged the new feature. However, the beta code does offer a few clues about what to expect.

Spotted in WhatsApp version 2.20.66 for Android, the new feature will allow users to encrypt and password protect their back-ups before the data is stored on Google Drive. This means WhatsApp users will have to enter the correct password to be able to restore all of their text messages, group chats, images, videos and documents to a new handset.

If you check out the Google Drive section of the settings menu on WhatsApp for Android at the moment, you’ll find a warning that states cloud backups are not protected by the same end-to-end encryption used by the app when you send messages. That means it could theoretically be possible for hackers to trawl through the saved data.

The new Protected Backup feature adds an extra layer of security. That means neither WhatsApp nor Google will be able to see what is stored inside your backups. 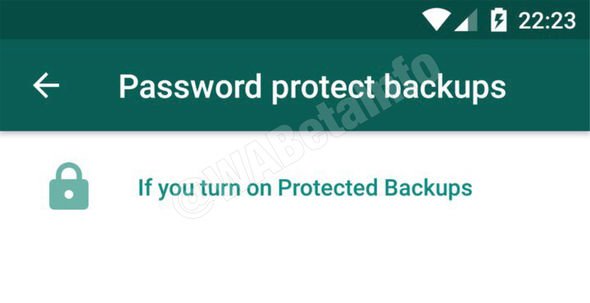 As it stands, WhatsApp backups on iPhone are encrypted by Apple when they’re uploaded to iCloud. However, the Facebook-owned company doesn’t use the same end-to-end encryption that it employs for all its messages when storing duplicates of those texts in the cloud.

Although there’s no evidence in the latest iOS beta of a Protected Backups feature, it would make sense for WhatsApp to offer the privacy-focused option to both iPhone and Android smartphone owners going forward.

Since this feature is starting to crop up in the beta, work is well underway. However, that’s no guarantee that we’ll see the finished product rolling out to anytime soon. After all, it took WhatsApp more than 18-months after the first evidence that it was considering a dark mode for its messaging app to roll out the final product.

Express.co.uk will be keeping a close eye on the whispers leaving WhatsApp HQ and will have all the news on this new feature – as well as any other innovations coming to the world’s most popular chat app.